Please take a minute to check out their new website, and please feel free to call and say hi to Jack Mac! 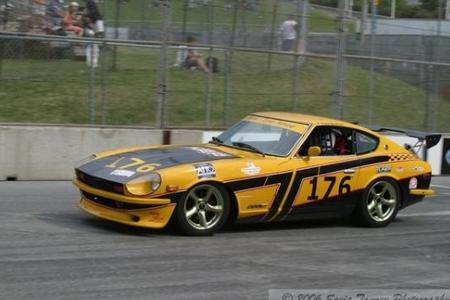 In early 2003, Jack developed a new genre of automotive television show - he pitched the format idea to Fox Networks in Los Angeles and they liked it. Within a few months SPEED Channel aired the first episode of the extremely popular television series TUNER TRANSFORMATION. For a total of 3 seasons, Jack was the co-host, the show's Executive Producer, writer, and Head automotive TUNER.

For 2015, Jack returned to the Ontario Region Autocross series where he once again took the overall Prepared / Modified Class win!

In 2016, Jack competed in the first and only 'Brack Classic Hill Climb' in Owen Sound, which included some truly outstanding race cars. In 2017 and 2018, Jack took his Ducati to the race track, and early 2018 received his Motorcycle Racing license at Shannonville Motorsport Park. He also rode his Ducati to the top of Pikes Peak in April 2018; at 14,000+ ft, the snow covered Peak was enjoying 0 C degrees temps with winds whipping at 68kph! Jack is the first rider in the world, to take the then new Ducati Supersport to the very top of Pikes Peak!

In 2019, Jack organized and launched the first ever 'GRIP' (Grey Region Import Performance, which is a Facebook group he founded in 2018) Championship Autocross Series held at Canada's fastest 1/4 mile high-banked paved oval 'Full Throttle Motor Speedway in Varney Ontario Canada. Close to 40 drivers in all marques of street legal vehicles competed over the 5 event series in three different classes. Jack won the Modified class and also captured the Overall Series Championship. Jack has a surprise for 2020 - stay tuned!.

Jack MacDonnell has been an avid Motorsports enthusiast his entire life - in fact, his Mom gave him a 'Matchbox' toy car to chew on instead of a rattle as an infant. When Hotwheels were introduced in '68, he graduated to Race Track builder, and not long thereafter Champion Road Racer in 'AFX' Challenges against neighborhood rivals.

Once he obtained a real race license, he entered Autocross, Time Attack, and ProSolo events everywhere. With numerous class wins in these disciplines he moved onto Tarmac Rally racing entering the grueling and awe-inspiring Targa Newfoundland Rally winning the elusive Targa Plate in 2004. Jack also raced at the 2006 Toronto Indy in the Vintage GT Challenge (opposite picture) securing a Top 5 finish in his class - of 45 race cars in the entire field, Jack's was the only Street Legal Race Car entered - needless to say, he surprised many spectators and fellow racers that weekend.

In 2014, Jack continued is his winning ways taking the Overall Prepared / Modified Class win in the Mobil One Ontario Regional Championship Series in his seriously trick '76 Datsun 280Z that he has owned and redlined for more than 30 years.